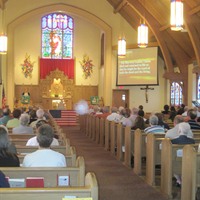 From its very beginning the history of St. John’s is a history of Christian people reaching our in faith to meet the needs of others.  St. John’s began in the summer of 1901 when the    Mission Board of the Wisconsin District, German Evangelical Synod of North America began   to investigate the possibility of establishing a congregation in Sheboygan.  A congregation of  13 charter members was organized a year later on May 2, 1902 through the efforts of  Rev. S. Lefton who was pastor of St. John’s Church, Schwartzwald.

In June 1902, the Mission Board call the Rev. E.R. Krueger, a newly ordained pastor.  The congregation began a Sunday School, Ladies Aide, and Choir.  In 6 months the Congregation had constructed its first church building and 3 years later, in 1905, the first parsonage was built.  By 1907 the congregation was fully self-supporting.  One year later in 1908, the church building was enlarged a basement was added and a furnace was installed.

In 1926 the first English language service was held.  One year later in 1927, as the congregation celebrated its 25th Anniversary, it was noted that in order to fill the needs of the congregation, a Sunday School Hall should be included in the future plans.          This structure was dedicated in March of 1930.

The next change for St. John’s came in January of 1949 when Rev. E.R. Krueger announced his retirement after 47 years of faithful service to our Lord at St. John’s.  Rev. August Grollmus served as Pastor of St. John’s beginning in June of 1949.

Rev. Vernon E. Jaberg was called to serve as St. John’s third pastor in August of 1966. In the 70’s and 80’s St. John’s held an active participation in efforts to better the Sheboygan area, alleviate world hunger and reach the needy in our community.  This became a regular   part of congregation life and remains a part of St. John’s today.

In February of 1990 Rev. Jaberg retired after serving St. John’s for 23 years.  In February of 1991 the congregation called Rev. Gregory S. Whelton as its fourth pastor.  The 1990’s have become another milestone for St. John’s.  The need to make St. John’s accessible to the handicapped.  The Barrier Free Access project was completed in January of 1993.

In June of 2022, Pastor Gregory S. Whelton retired after 31 years of Service to St. John’s.

Our faith may be 2000 years old, but our thinking isn’t. At St. John’s we acknowledge the past as well as the future.  We continue to strive to find innovative ways to bring the word of God    to our community and let everyone know that `God is still speaking at St. John’s United Church of Christ.